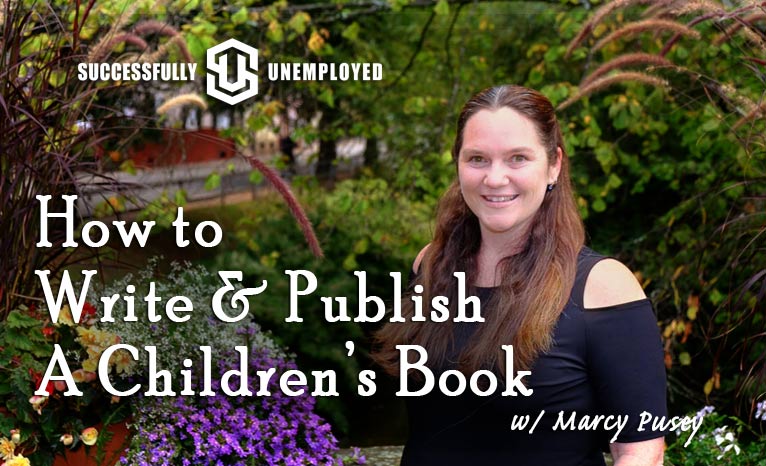 Best selling author Marcy Pusey shows us how to become an author and be successful in making money to never work a job again.

This is the step by step process to be write and self publish a book and become a full time author.

Today, I am excited to have Marcy Pusey on the podcast. Marcy is a missionary in Germany, a best-selling author, and she helps other people write.

Article Contents show
1 Marcy Makes Money by Writing Books and Publishing Them
2 Before Going to Germany, Marcy and Her Husband Were Fostering Children
2.1 Watch How to Write A Children’s Book Episode Here:
3 How Marcy Wrote Her First Book
4 How to Know You Have a Good Story, Before You Start the Process
5 Some of Marcy’s Children’s Books:
6 Write to a Million People and Write to One
7 How to Make Sure You are Telling Your Story Well Enough that Readers Want More
7.1 Listen to How to Write A Children’s Book Podcast:
8 How to Make Sure You Grab Those Emotions
9 How to Paint a Picture to Make the Reader Feel Like They are There
10 How to Write a Good Children’s Book
11 Marcy Hires Artists to Illustrate Her Children’s Books
12 Artwork in a Children’s Book is How People Make a Decision Right Away
13 The Money is in a Series Especially How to Write Children’s Books
14 Go Into Writing a Book with the Intent for it to be a Series
15 Marcy Wrote Two Adult Nonfiction Books in Four Weeks
16 Getting the First Book Written and Published is the Hardest
17 You Should and Shouldn’t Take Stock in Reviews
18 To Scale Fastest, Build Some Sort of Business Off of Your Books
19 Successfully Unemployed Rapid Fire Round
19.1 What Marcy is Doing to Make the World the Better Place
19.2 The Advice Marcy Would Give to Someone Who Wanted to Get Started Writing and Publishing
19.3 The Advice Marcy Would Give to Her Younger Self
19.4 One Tool Marcy Uses on a Day-to-Day Basis
19.5 The Nonfiction Book Marcy Suggests
19.6 Find Marcy Pusey Online:
19.7 How to Quit Your Job with Passive IncomeGet the Best Selling Book FREE!

Marcy Makes Money by Writing Books and Publishing Them

In addition to writing, Marcy coaches people how to write and publish. She does some editing, specifically for children’s book writers.

Marcy is building a business on top of her books. Her books are oriented toward children and foster-adopt, so she does school visits and speaking engagements. Marcy does all sorts of things that contribute to her business and also to her income.

Before Going to Germany, Marcy and Her Husband Were Fostering Children

About eight years ago, Marcy’s husband was working a full-time job as a teacher in a low-income school district and Marcy was trying to be a dutiful, domestic wife. However, life is expensive, even with the fostering supplement.

Marcy wanted to put her younger kids into preschool, but she couldn’t afford it. She decided to take on a side job that was online as a social media manager to pay for preschool. This meant that when her kids were sleeping or off doing something, she was working.

Watch How to Write A Children’s Book Episode Here:

Until that point, Marcy’s education had been in therapy and social services. Marcy remembers that when her son was only a few months old, she still wanted to work. She had been working as a behavior analyst for a company, but she couldn’t do it with a baby.

Marcy switched from being a behavior analyst to cleaning the office where she worked. She would bring her son with her while she worked. She wanted to contribute financially to her family, but she didn’t know any other way than to have him with her.

How Marcy Wrote Her First Book

Marcy has always been a writer. She won tickets to the circus when she was younger, from a writing contest. Winning that contest always made her think that this could be a gift that not only helps her but helps other people. That was a seed that was planted very young.

When Marcy went through high school and college, she took career tests and they all came back saying she should be a counselor, teacher, or social worker. She followed that track, because no one ever told her she could be an author and make money from writing. She went to school for the thing those tests told her to go to school for and got the degree, the certification, and the licenses.

Marcy still had all of these stories that would come out of her. She thinks in book titles, characters, and themes. One day, she was talking to a friend who was publishing traditionally. When you publish this way, it is all about who you know.

Marcy decided to write a book and publish traditionally. After seven years of writing and trying to get her book published, her book was read aloud at a conference, anonymously, to a number of agents.

Her book got the furthest with those agents of any of the books at the conference that day. As they heard other books being read, they kept referring back to Marcy’s book as the model of how to write a good quality story.

At the end of the workshop and conference, they still chose not to publish Marcy’s book. She did all of the work and went to all of the writers conferences and clubs, and after seven years she still wasn’t able to publish traditionally. At this point, self-publishing was becoming a more viable option.

Marcy encountered a school that would not only teach her how to write and publish but aim for a best seller. The school was aimed toward adult nonfiction, but she decided to join. Marcy followed the process, wrote her book, and everything they taught her how to do, she did. Marcy was able to recoup all of her costs within a month of being published.

Publishing is a very legitimate option for making money and growing your impact. This is her heart. She is able to impact people and families she cares about. Now she has no agent or publicist taking their cut out of the middle.

How to Know You Have a Good Story, Before You Start the Process

When Marcy wrote the book that she didn’t plan on writing, it was called Reclaiming Hope, Overcoming the Challenges of Parenting Foster and Adopted Children, it was the outpouring of her soul.

The leader of the school encouraged her to write about something that was easy, fast, and would be exciting for her to write. He knew these three things would help the students learn the process the easiest.

This is what brought her to this topic. If this is what you are writing about, it can’t not be good. By learning how to write children’s book, you will be able to have a good story with good illustrations.

Some of Marcy’s Children’s Books: