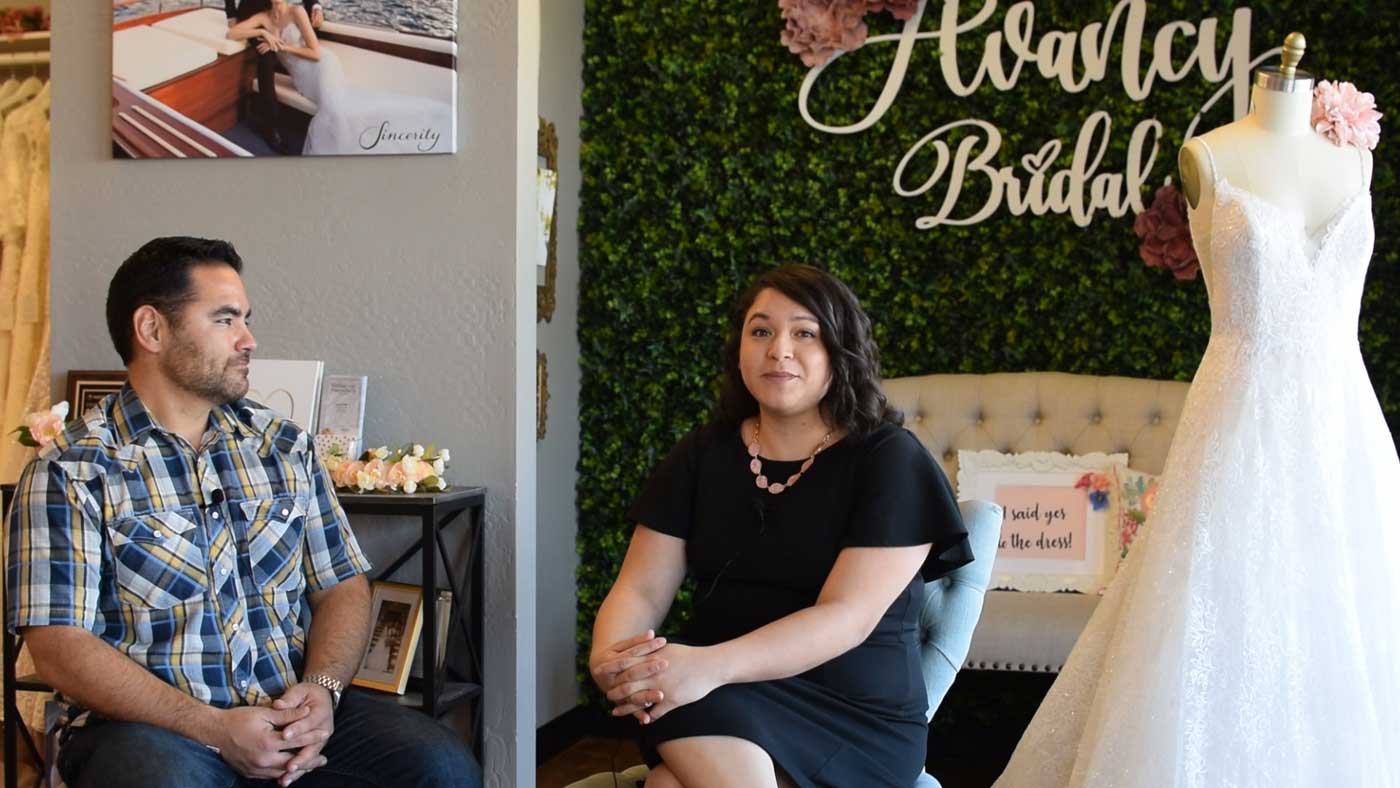 Learn from the founder of Avancy Bridal how to start your own bridal boutique business helping brides have the best wedding ever. The bridal shop business caters to women all over the country who fly all the way to work with Vanessa Trufin and her bridal shop Avancy Bridal.

Today, I am excited to have Vanessa Trufin on the podcast. She owns a bridal shop and has many people coming to her from all over the country. Like Vanessa, you can be successfully unemployed.

How Vanessa Makes Money Without Having a Job

Vanessa has had a dream of owning a bridal shop since she was young, and the passion has fueled her.

She is blessed to be able to make money while she is doing something she loves and she gets joy from providing beautiful value to her customers.

When someone leaves her shop, they have found the gown they are going to become a wife in. She is helping people every day.

What Vanessa Was Doing Before and How She Became Successfully Unemployed

Vanessa worked in marketing, right before she started Avancy Bridal. It wasn’t a matter of if she would work in the bridal industry, it was when. She knew she had a huge passion for it, but people just thought she had an obsession with getting married. She got married and the obsession didn’t go away.

When she was in high school Vanessa asked if she could major in wedding planning, but that didn’t exist.

Vanessa eventually chose advertising and public relations, because she utilizes those skills every day in her business.

After school, she worked in casino marketing for a few years, and it was fantastic. But, the creativity, sparkle, and pizazz that comes with weddings was missing. She then worked with a wedding planner, but she learned how not to run a business rather than how to run a successful business.

When Vanessa and her husband decided they wanted to travel, she decided it would be a good time to find a side hustle to make money and fuel her love for love. She got two part-time jobs, and for one she worked for a very well known videographer in Arizona.

On weekends, her days were filled with weddings, flowers, dresses, and brides and it gave so much life, because it energized her for the week.

In addition, during the week, after work, she got a job working for David’s bridal.

It was fun and she learned that connecting with women, hearing their stories of love and how they got engaged, what led them to her presence and her fitting room, and helping them find that dress is what led her to wanting to do this on her own.

When Vanessa was young, she didn’t think she would want to help women find their dress, but after only a couple of weeks, and learning that she was good at selling, she knew this was it.

On their honeymoon in Costa Rica, Vanessa and her husband were on a canoe and Vanessa said she wanted to travel and live somewhere else. Her husband patted her on the shoulder and said, “Okay, sweetie”.

When they got home, she fueled him with the adventure of being somewhere new and she convinced him to travel.

Vanessa’s husband is a financial guy. He runs their finances and her business finances and that is his passion.

However, it was Vanessa that sat down and figured out how much they would need to save per month and how much they could live off per month to be able to travel for a year.

Vanessa wanted to celebrate their first year of being married somewhere new. She doesn’t know how she convinced him, but they made it work. If she could do that all over again, she would. It was the best year and her husband admits that it was a good idea.

They look back on that time with fondness.

Vanessa has known forever that she loves love and weddings. In that sense, she was lucky to know that, because not many people know what their passion is or that being successfully unemployed is something they can achieve.

When it came to their last two months of their travels, Vanessa had to decide if she wanted to either start looking at jobs and send out her resume to get back into marketing or start doing research and figure out if she was going to commit and start her own business.

Vanessa knew if she got a full-time job, she would like the regular paycheck and when she leaves work, she would want to leave her work behind and be at home. It isn’t like that with a business, because you live and breathe the business.

It is the last thing on your mind at night and the first thing you think about when you wake up.

When they got back, Vanessa got a part-time job online teaching English to students in China. It was fun, because she would do that in the morning and, afterward, she was awake and energized.

She dove into doing research and figuring out how to get her business started.

Vanessa is a big fan of lists. She had many notebooks filled with things she needed to do, but half of those listed were research. She doesn’t typically over analyze or over think things, but she did with the business. She was doing research on everything and kept asking herself what would her bride do.

She took to Pinterest, wedding magazines, and following any and all wedding planners, videographers, and wedding venues she could find. She was looking at who the brides were, what ages they were, what were they wearing, etc.

Based off the styles she was seeing, she looked for those designers.

Vanessa always thought she wanted unique and different designers that you couldn’t find in the state of Arizona. She wanted to be the store that brought it in, but she later learned that wasn’t the way to go about it.

She learned from that mistake. She took to doing a lot of research to figure out where her location was going to be and looking at other stores.

Vanessa uses social media a lot. Using tools like Instagram was huge. She dove into creating a personality for her store and that is something that sets her apart from everyone else. You want to set yourself apart and be uniquely yourself in your business.

If you try to emulate somebody else, you are going in the wrong direction. Setting up that unique personality for Avancy Bridal was the hardest part. She started portraying